This post first appeared on Hack Education on December 12, 2011.

When President Obama delivered his State of the Union speech in January 2011, he spoke of the importance of science and technology research and education to the U.S. -- past, present, and future:

Half a century ago, when the Soviets beat us into space with the launch of a satellite called Sputnik, we had no idea how we would beat them to the moon. The science wasn't even there yet. NASA didn't exist. But after investing in better research and education, we didn't just surpass the Soviets; we unleashed a wave of innovation that created new industries and millions of new jobs. This is our generation's Sputnik moment. Two years ago, I said that we needed to reach a level of research and development we haven't seen since the height of the Space Race. (emphasis mine)

It wasn't the first time the President invoked Sputnik to talk about our need to spend more, focus more on STEM (science, technology, engineering, mathematics) education and STEM careers. And it was hardly the last. The metaphor of the Space Race permeated many of his education speeches this year (including one I attended in February at Intel's Hillsboro, Oregon plant).

That metaphor also extended to the administration's proposal for a new education technology agency: ARPA-ED. $90 million was earmarked in the President's 2012 budget for the new agency, which according to the Department of Education, would fund both private and public research by industry, universities, and other organizations to work on projects such as personalized digital tutors, adaptive learning platforms, and game-based learning (PDF).

If the name ARPA-ED sounds familiar, it's deliberately so, echoing DARPA, the Defense Advanced Research Projects Agency. DARPA was established in the 1950s as a response to the Sputnik launch and was meant to protect the United States' technological supremacy. Although it's a Defense Department agency, DARPA research isn't tied to specific military missions, but it has been responsible for a number of technological innovations with sweeping implications, including ARPANET, the predecessor to the Internet. By creating a new, similarly-named agency, the Obama Administration hopes to foster that sort of technological innovation in education.


Whether or not you point to national security or the national economy, the rhetoric is certainly meant to wake more people up to the predicted shortages of STEM-trained workers. After healthcare, STEM is the fastest growing sector of the economy, and an estimated 1 in 20 jobs by 2018 will be in the STEM field. There's concern that the U.S. will not be able to provide the skilled workforce to fill these jobs.

But just as importantly, I'd argue, STEM skills are likely to permeate all jobs -- we don't simply need more scientists and engineers; we all need to become technologists. (See Georgetown University's Center on Education and the Workforce for detailed statistics on jobs, education, and earnings released this year.)

Despite all we do to stress their importance, STEM fields continue to struggle to attract and retain students. It isn't simply a matter of preparing students adequately for these fields either. Some 40% of students that enter college planning STEM majors end up switching to other fields or failing to get a degree at all. That rate is even higher (60%) among pre-med students, twice the attrition rate of all other majors combined. Moreover, women and minorities remain underrepresented in STEM fields, again the most talented students opting for careers elsewhere.

(My favorite slide of the year: that's investor and Lotus 1-2-3 creator Mitch Kapor on the left, working on a computer mainframe when he was a teen. On the right, the young woman is working on an Arduino project.)

And hopefully it's becoming clear too that the way to boost students' interest in STEM is not through an education that emphasizesmore standardized testing but one that embraces more hands-on learning. (See my trends post on data for more about standardized testing in 2011 because I'm skipping that topic here.)


Thankfully, this was a good year for kids learning to code:

MIT's Scratch continued to be a popular choice for introducing young students to programming and computational thinking. Scratch hit a major milestone this year too, with over 2 million Scratch projects uploaded to its community site. Scratch was the inspiration behind Stencyl, a game creation studio for Flash games, that launched this year. Microsoft also released its own game-building tool Kodu to help kids learn to build XBox games, holding its first annual Kodu Cup competition (You can read my interview with the winner, 10-year-old Hannah Wyman here). And while Google's Android App Inventor gave me a bit of a scare this year when it appeared as though the project was getting the ax with the closure of Google Labs, Google ended up donating App Inventor -- the code and the project -- to MIT, along with some cash to seed a new Center for Mobile Learning.

2011 wasn't just a good year for getting kids exposed to software development. There were several exciting new hardware projects too that were aimed at young engineers: Raspberry Pi -- a $25 ARM/GNU Linux box. littleBits -- snap-together circuit boards. Arduino -- open source hardware and software. All of these are meant to provide an affordable and accessible way to learn.


While the geeks among us are probably familiar with many of these products and projects, there's still a long road ahead to expose all students to these sorts of opportunities. And there's a long road ahead to in convincing them that working in STEM is as cool and exciting a future to aspire towards as sports or music. (I'm sorry, The Social Network was NOT a convincing argument, particularly if you are a woman or a minority.)

Enter Black-Eyed Peas frontman will.i.am. Intel hired him early this year as its Director of Creative Innovation. But by the summer, will.i.am's focus turned to STEM education as he took up Dean Kamen's challenge to make STEM into rockstars. Will.i.am used his own money to buy airtime for "i.am.FIRST -- Science is Rock and Roll", a celebrity-filled, ABC back-to-school special that highlighted the teen teams competing in the 20th annual FIRST Robotics Competition.

Lifelong Learning: Hackers and Hobbyists and Builders and Makers


But it wasn't just K-12 or even college students that were exploring STEM education this year. A number of education/technology startups launched in 2011 aiming to help anyone learn to program: Treehouse, Codecademy, Code Academy, and General Assembly, to name a few.

For all the invocation of the Space Race or the spotlight on geeky rockstars, it's economics -- plain and simple -- that probably drove most of this interest in learn-to-code lessons. As the tech industry remained one of the few shining spots in an otherwise lousy economy, it's hardly surprising that many people wanted to brush up on their technology skills. Learn to program. Get a job.

But to focus solely on job readiness as the driver behind the increased interest in STEM education this year misses the boat. When you talk about "STEM jobs" you're arguably overlooking entrepreneurship. And you're certainly overlooking hobbyists.

There's a thriving Maker Movement, which as my buddy Tim Carmody noted in Wired, went big in 2011.

It wasn't just the T-for-technology or E-for-engineering that were popular this year either. The idea of "citizen science" gained more widespread recognition, offering people more opportunities to hack, research and explore STEM outside official majors and careers. Because while yes, it's important to get kids interested in science, technology, engineering and math, it's just as important for keeping adults engaged in scientific and technological work -- even if they don't opt for STEM careers. 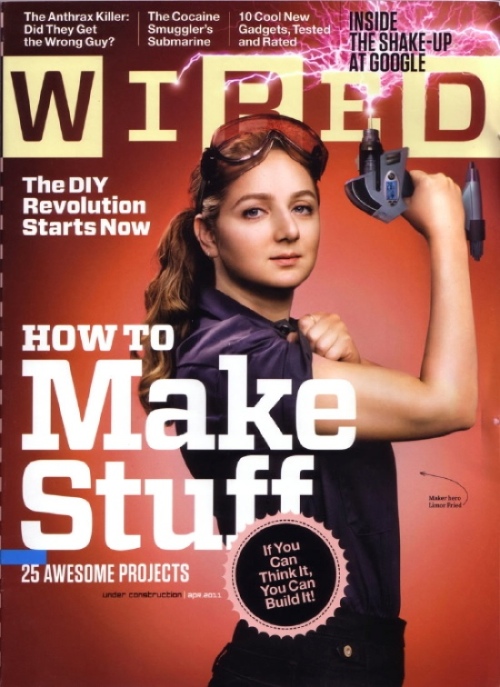